An Evening of Spiritual Excellence 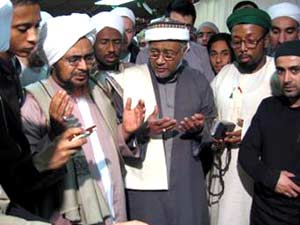 It may be the end of the blessed month of Rabi al-Awwal but most certainly not the end of Mawlid un-Nabi (saw).

Alhamdulillah, Minhaj ul-Qur'an London Islamic & Cultural Centre was graced by the blessed company of the great Shaykh and spiritual leader from the land of Hadramaut (Yemen), Shaykh Habib Umar bin Salim bin Hafeez. He was accompanied by Shaykh Babikir Ahmed Babikr, Imam of Yusuf Islam's Islamia School (London) who is also a greatly spiritual personality as well as a great da'ee.

However, the most auspicious company and blessed presence was that of the Blessed Hair of the Beloved Prophet (saw). Not only were we in the company of this treasured magnificent Holy Relic, but also Allah (swt) continued to shower His ne'ma upon the congregation gathered at the London centre by placing us in the presence of the blessed and holy lineage of Sayyidina

Rasulillah (saw) in the form of Shaykh Habib Umar bin Salim bin Hafeez. This was truly a double blessing. 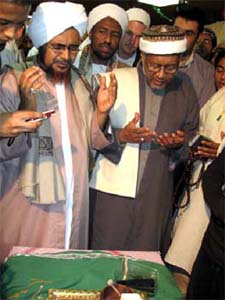 What greater way was there than to open this auspicious occasion with a beautiful Qur'anic recitation? The baraka and blessings continued to flow as Minhaj ul-Qur'an's own 'Hassan bin Thabit', Al Haaj Mohammed Afzal Naushahi recited salawaat and darud from 'Dala'il Barakaat', an masterpiece in Arabic literature containing 10,000 salawaat and darud composed by Shaykh ul-Islam Dr. Muhammad Tahir ul-Qadri, in the style of the earlier work of Imam Juzuli (ra) 'Dala'il ul Khairat'.

Following the Sunnah of Rasulillah (saw) the Shayukh were clearly enjoying and fully appreciating the beautiful Arabic resonating from the gifted Afzal Naushahi. In the recognisable and melodious style favoured by Shaykh ul-Islam, the blessed words seemed to penetrate the hearts of the Shayukh and all others present.

In his address Shaykh Babikir Ahmed Babikir spoke of his experiences during the time he spent in the blessed company of Shaykh ul-Islam Dr. Muhammad Tahir ul-Qadri while visiting Pakistan (during I'teqaf and Mawlid un Nabi (saw)) and time spent with Shaykh ul Islam in Yemen during their visit to the Habaib. He expressed his happiness at being able to be the means for Shaykh ul-Islam to meet with Shaykh Habib Umar bin Salim bin Hafeez. Yemen was blessed by Rasulillah (saw), along with Syria; knowing this it was the desire and wish of Shaykh ul-Islam to build a link with that country out of his love and respect for Rasulillah (saw). Allah (swt) made this possible alhamdulillah. Shaykh Babikir spoke very lovingly about Shaykh Habib Umar bin Salim bin Hafeez's father Shaykh Salim bin Hafeez and stated that he was a great Scholar and Shaykh but unfortunately was perceived as a threat by the previous communist regime of Yemen and was martyred in the way of Islam. May Allah (swt) shower His blessings and Mercy upon him, Ameen. 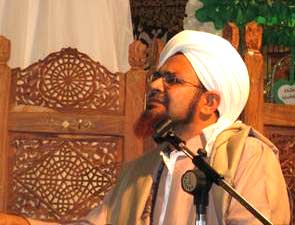 Shaykh Habib Umar bin Salim bin Hafeez very humbly addressed the brothers and sisters, accompanied by his translator so that we non-Arabs could also benefit from his pearls of wisdom. The Shaykh spoke about the beautiful relationship and link (nisbat) between Sayidina Fatimah (ra) and her beloved father Sayyidina Rasulillah (saw). Being a great and blessed orator, the Shaykh's words touched the hearts of all those who were present. The Shaykh related incidents regarding the grandchildren of the Sayyidina Rasulillah (saw) and about Sayyidina Ali (ra) including the great status of the daughter of the Sayyidina Rasulillah (saw), as well as that of all the Ahl al-Bayt. The Shaykh stated that the people of Minhaj ul Quran were the true lovers of Sayyidina Rasulillah (saw) and that Shaykh ul Islam was a great lover of the Prophet (saw). Shaykh Habib Umar bin Salim bin Hafeez ended by appreciating and praising Shaykh Babikir for arranging Shaykh ul-Islam Dr Muhammad Tahir ul-Qadri's visit to Yemen that allowed for them both to meet.

Shaykh Sadiq Qureshi, Imam of Minhaj ul-Qur'an, London expressed his delight and honour at receiving the eminent guests and spoke about the link between Shaykh ul-Islam and Shaykh Habib Umar bin Salim bin Hafeez, expressing his gratitude and happiness at the Habaib of Yemen and Minhaj ul-Qur'an joining together.

Brother Abbass (General Secretary Minhaj ul-Qur'an London and stage secretary for the evening) promoted the new Mawlid un-Nabi (saw) booklet for free distribution. This is a concise but comprehensive and well referenced booklet regarding the legality of Mawlid (saw) and the concept of Bid'a, based on the teachings and lectures of Shaykh ul-Islam Muhammad Tahir ul-Qadri. Brother Abbass also pointed out the comprehensive chain of narration possessed by Shaykh ul-Islam also contained in the booklet. These beautiful gifts were distributed amongst the followers of Shaykh Habib Umar bin Salim bin Hafeez, and all other participants.

This auspicious occasion rightfully ended with a Du'a and Ziyarah of the Blessed Hair Mubarak of Rasulillah (saw) whist reciting the Salwaat and Darood upon the greatest of creation.